Art Bell - An Interview With A Legendary Talk Show Host

Today, it's with great pleasure that we share with you a conversation I had with Art Bell, the inimitable host of "Coast-to-Coast AM." Just a few minutes on the phone with Art, and you know that you're in the unmistakable presence of a man who lives a full, contemplative life. We arranged the interview to talk with Art about a Giant Loop Antenna he installed on his property. The conversation, not surprisingly, spanned the gamut of global and local issues, and confirmed, once again, that Art not only talks with people through his radio program, but also listens earnestly to the world through his knowledgeable use of Ham radio.

Several months ago, while pulling into his driveway, Art had a revelation. Looking at his land, and the vast amount of open space available to him he said to himself, "Why not build an antenna. Heck, why not build the biggest damn antenna in the world." And so, as with so many of Art's ideas throughout his life, his antenna began a reality. Right now, near his house, Art has the pleasure of tuning in and transmitting to the world courtesy of a 1000-foot Giant Loop Antenna (see picture below).

The construction of the Antenna is a marvel in itself. In order to get the antenna to the right height, Art contracted a crew to put six 65-foot high poles around the perimeter of his yard. Using a series of pulleys and guy-wires, the crew then ran ten gauge insulated copper wire from one pole to the next. I asked Art about the most distant signal he received, he said "there is no farthest. I can tune in the world."

And that's the magic of Art's world. He can tune in the world. Through his mastery of Ham radio, Art can talk with Ham operators in Russia, China, South Africa, South America – truly anywhere in the world. Art finds that when you talk with people around the world, you might be "surprised to find that most people really aren't that interested in talking about the US. They're more interested in their own lives, and in the hobby itself. A lot of the conversations are just about radio." 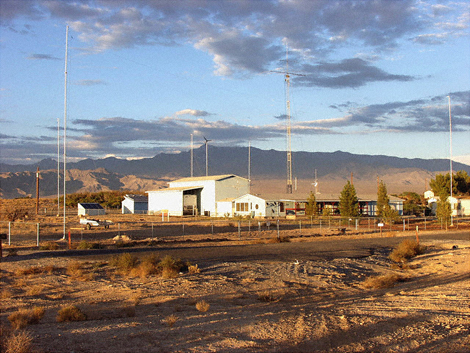 But there's more to Art's antenna than just amazing reception, there's also a powerful, even dangerous anomaly at work. Soon after the antenna went up, Art put his hand to it and, well, as he put it, "I had the crap shocked out of me... several times." Somehow that enormous antenna, free from any connections to a power source, was generating 350 volts. "There's no wind," Art says, "and it's not static generated." The power company couldn't give him any answers, and the only way to get rid of the voltage before it ruined Art's equipment – or really hurt someone - was to take it to ground. "I drove eight-foot rods into the ground... and finally got rid of the voltage. It's very curious. Where is the power coming from? It's coming from... I don't know where. It is coming from the differential between the sky and the earth? I don't know..."

But that's the beauty of the world as Art sees it. In his show, in the books and movies that he enjoys, Art always prefers to hear stories of things that could come to pass. "I'm drawn to science fiction that's based on science fact, or that which is about to be science fact. I don't like complete fiction. I like things that are projections of what's likely to be. I don't like something so fantasy filled that I couldn't imagine it ever happening. I like things that could come true. That's how I conduct the show." And that's why Art loves the possibility of a Tesla effect (http://www.pbs.org/tesla/ll/index.html) in his giant antenna.

Art's willingness to respect and welcome even the most controversial possibilities of what might come to be has made him an icon of recent history. Without Art's interest, the computer problems of Y2K (year 2000) could have cost the nation, and the world billions, of dollars in malfunctioning computers and software. The Wall Street Journal reported that because of the "Y2K Scare," most financial companies had offsite-backup of important data. In fact, Art will most likely go down in history as one of the pioneers in integrating radio with the Internet. "I talk about such esoteric subjects that if I've got photographic evidence, people can just see a picture of it on the Web." Thanks to Art and his understanding of the impact of the Internet, radio listeners can enhance their listening experience by looking at photos of ghosts, possible UFOs, and other mysteries that may surround us.

Years from now radio will probably follow Art's lead and integrate more of the Internet into the radio listening experience. For now though, Art seems to be one of the few radio artists who knows how to do it right. It's no surprise to find Art on XM Radio, or championing the possibilities of streaming radio on the Web. When I asked Art about the impact of digital or satellite radio his response was straight forward and honest: "I don't care how my show gets to people's ears, as long as they can hear it. Internet radio is stunted right now because of the RIAA (Recording Industry Association of America). It was just taking off, when they stopped it."

While talking with Art, it was easy to talk about the world. Wanderlust is a major theme in his book The Art of Talk. Art has traveled the world, and talks with the world from his home in Pahrump, Nevada. It seemed fitting then, however serious, to ask Art about how he thought the events of September 11 changed that world. "Oklahoma City was a wound in the soul of America. September 11 strengthened it." After September 11, Art noticed a surge in the pride and strength of our country, a pride that was evident in Art's own voice when he talked about how Americans across the country responded to the tragedy by coming together and helping one another.

I asked Art how he thought the tragedy might have affected his own show. In a somber, reflective tone he said, "I think that a lot of my audience was less surprised when it happened. I think more people now understand what I mean by the quickening and the rapid changes we're seeing. I think my audience was more prepared for something like 9/11." 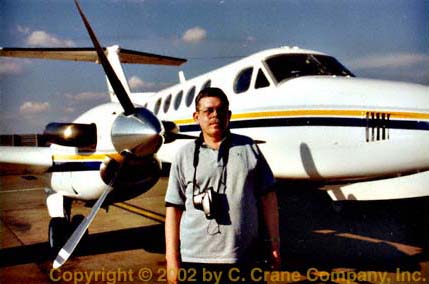 It's amazing to think about really. To imagine how a hobby that Art got into when he was 12 years old could grow into such a national, well, international phenomena. If ever there was a man of the world, Art Bell must certainly be considered among them. He's one of the few radio hosts brave enough to have open phone lines, and definitely one of the only ones talented enough to do it well. Listen to Art's show, or if you have the privilege to talk with him as I did for this interview, you'll discover a man with a keen and rare understanding of what it means to think. "I like to let my listeners think for themselves, come to their own conclusions. I never tell anyone what to think." And what better way to keep yourself open to other people's thoughts than to talk with the world.

At the end of the interview, Art told me that a few people around the world are already starting to experiment with their own Giant Loop Antennas. "A lot of people might endeavor to build an antenna like mine - based on it. It's real eye-opener, an amazing antenna. There's just nothing else in the world quite like it. Hopefully, some of the experimenters out there will give it a try."